Many customers come across this Hamletic question, while searching for the best instrument and method for spotting their microarray. The diagnostic kits, based on microarrays are becoming an important tool for many laboratories nowadays. The boom started with the need for covid testing which in fact speeded up the whole process of producing diagnostic tests for other diseases, allergies, checking antibodies, proving biomarkers for cancer, finding genetic aberrations, residues, etc.

We decided to prepare on our blog series of articles, about contact printing and non-contact dispensing, to show the advantages and disadvantages of both methods, differences between them, their applications, and issues which can occur and how to solve them.

Let’s go to the world of droplets.

At the beginning some historical facts about microarrays.

Microarray technology means miniaturization of hundreds of assays on a small place. The concept and methodology of antibody microarrays were first introduced in 1983 by Tse Wen Chang. Chang used the term “antibody matrix” and discussed “array” arrangement of antibody spots on small glass or plastic surfaces. The next step toward microarray was a method called dot blot. In the late 1980s, there was an idea of analysing multiple hybridization targets in parallel by applying them to a filter with a defined pattern. Parallel measurement of signals was enabled by imaging methods. The density of spots became increased by replacing the manual taking and placing samples onto filters by using robotics. Automation increased the speed of the operation, removed human errors that inevitably happen with highly repetitive procedures, and improved the accuracy of depositing samples.

Nevertheless, the biggest impact on microarray development had research of DNA. The main difference between protein and DNA microarray is that at protein microarray the purified proteins are placed on the surface, while DNA microarray contains in the spot only small, specific sequences of DNA (probes, reporters). The DNA microarray were originally developed for sequencing analysis and became widely adopted for the measurement of gene expression levels. There were involved two companies - Affymax, founded in 1989, and Affymetrix, spun off from it in 1993. Affymax was mainly interested in high-throughput drug discovery methods to enable large collections to be prepared quickly to fulfil the needs of fast screening.

In January 1989 there was a vision of preparing millions of peptides by using the same method, like computer chips. In 1995, there was published a first study by researchers from the Stanford University, close co-operator of Affymetrix, where the word 'microarray' was used for the first time. The samples in the study were printed by high-speed robot on a glass, the instrument consisted of the arrayer and scanner. The arrayer was a variation of the standard "pick-and-place" robot, quite common equipment of many large molecular biology laboratories. The researchers enabled free sharing of the technology, protocols, and on their laboratory website published the instructions for constructing do-it-yourself robotic system, including all the software updates for operation of the scanning system, details on manufacturing and servicing the printing tips. In those days there was not available any commercial producer of these laboratory microarray spotters, which the lab could purchase. 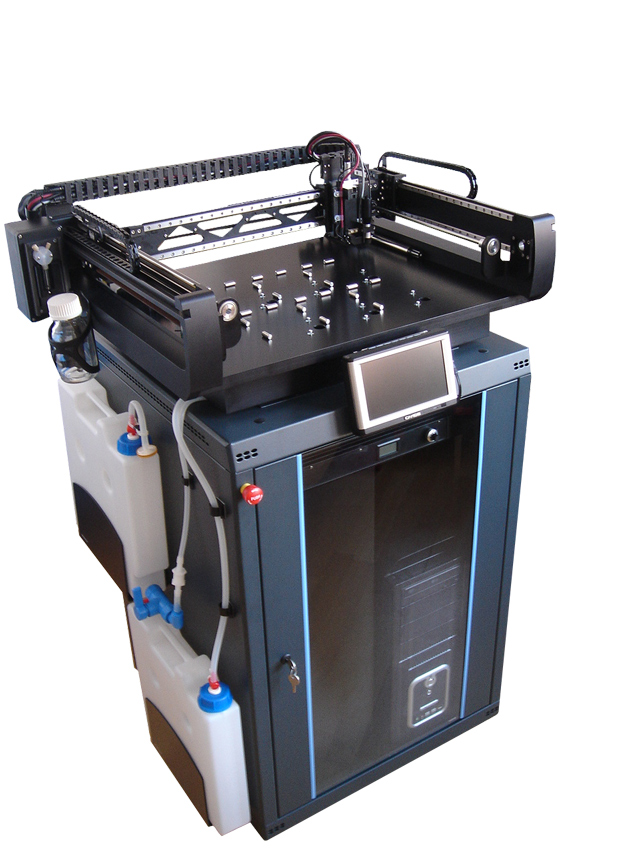 Currently there are many possibilities to equip a laboratory with an arrayer, fitting from R&D to huge production machines. Different pins and dispensers are available, with possibilities to place droplets of several picolitres till microlitres, of different viscosity or volatility, on various targets. There is always a solution for your application.