The Laboratory of Nanomedicine and Clinical Biophotonics (LABION - www.labion.eu) at Fondazione Don Carlo Gnocchi in Milan (Italy) is working on the implementation of a Surface Plasmon Resonance imaging (SPRi) platform for the analysis of natural and synthetic nano-sized particles, such as extracellular vesicles and liposomes.

A.Extracellular vesicles (EVs) are lipid-bilayer delimited nanoparticles naturally released from all cell types and found in different body fluids. They have a complex biochemical composition containing proteins, lipids, RNA and DNA with a specific molecular signature of the cells from which they originated. EVs are studied as potential biomarkers as they can change their composition and concentration according to the physio-pathological state of the cell of origin.

At LABION we isolate EVs from biological fluids, such as human serum, plasma and saliva, to be studied as biomarkers of neurodegenerative and cerebrovascular diseases. SPRi platform is used for the detection and characterization of multiple populations of EVs in order to support the diagnosis and to monitor disease progression evaluating the effects of therapeutic and rehabilitative treatments. The iFOUR Dispensing system is used for the preparation of the SPRi microarray where ligands are antibodies selected for the simultaneous and specific detection of multiple subpopulations of EVs coming from neurons, astrocytes, oligodendrocytes, microglia and endothelial cells, in order to compare their levels in samples from healthy subjects and patients in different disease stages.

B. Liposomes are synthetic nanovesicles of spherical shape made of phospholipids and cholesterol that can encapsulate a large playload of drugs and so used as drug delivery systems. Indeed, their composition and surface can be modulated to obtain desirable properties such as prolonged circulatory half-life, the delivery of drugs specifically to the target cells and the ability to form complexes with nucleic acids for genes delivery.

At LABION we are working on a project, called NEVERMIND (http://www.labion.eu/nevermind-project/), for the design and development of innovative engineered liposomes able to cross the blood brain barrier and release the loaded drugs selectively into brain suffering cells, to control neuroinflammation and microglial misfunction occurring in Alzheimer’s disease and Glioblastoma. The validation of liposomes includes the SPRi analysis of the binding kinetic between liposomes and targets. The iFOUR Dispensing system is used for the preparation of the microarrays on the SPRi biochip where ligands are receptors and the specific targets of drugs, to verify the binding kinetic of the liposomes with each identified receptor and to evaluate the interactions and the integrity of the encapsulated drugs to corresponding targets. 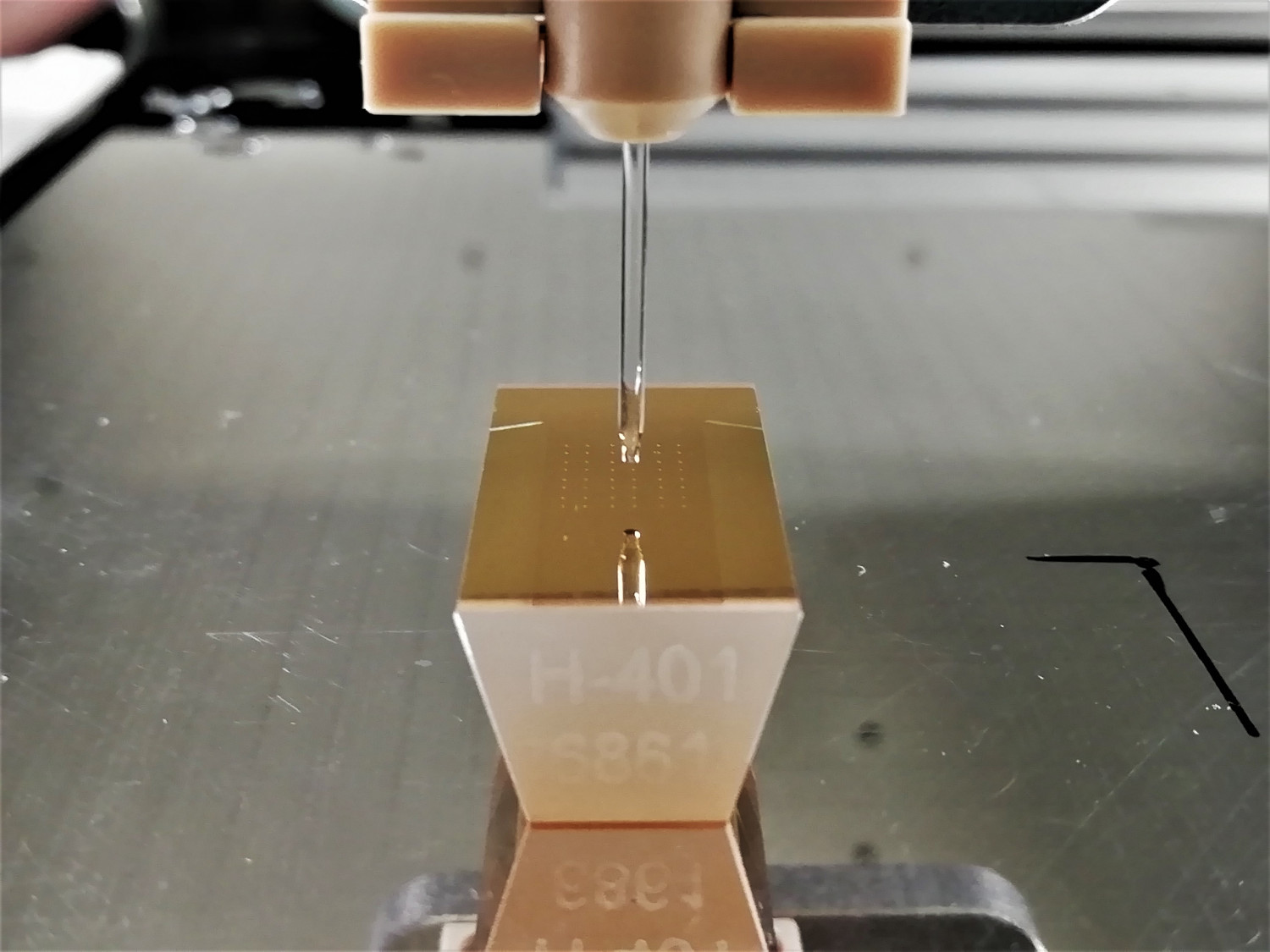 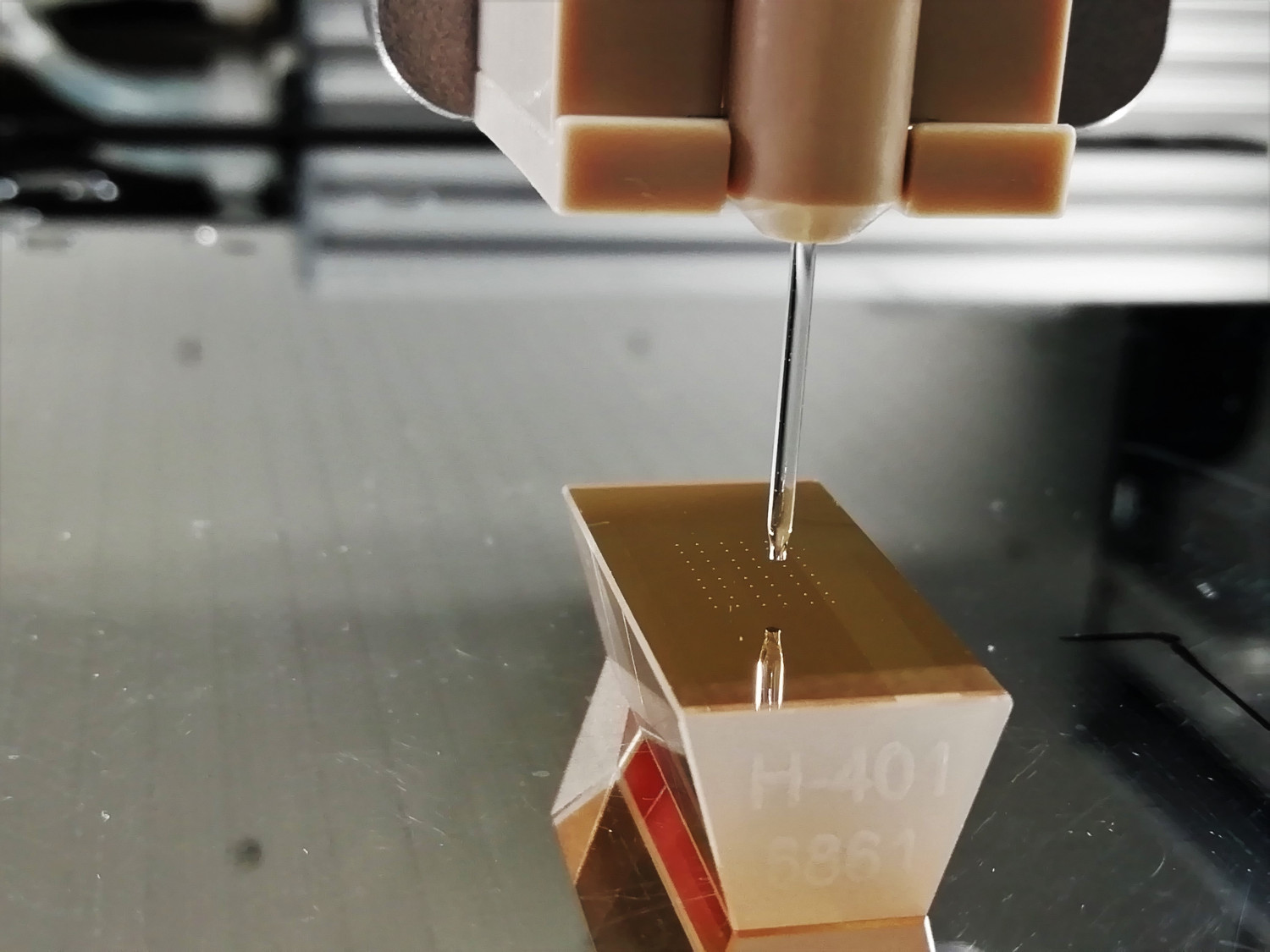 For both the applications, the iFOUR Dispensing system is the easy option of developing our microarrays on SPRi biochip of 1.2 x 2.5 cm that allows us to produce multiple arrays with different ligands spotted in picolitre/nanolitre volumes with high precision and accuracy thanks to the piezo dispensing technology (PDMD Dispenser).