The Micro- and Nanoscale Bioengineering Group at NYU Abu Dhabi has developed a microfluidic electrokinetic concentrator chip in polydimethylsiloxane (PDMS) that can readily be interfaced with standard microarrays for high-throughput assays (see Figure 1a). It enhances the detection speed of bioassays by concentrating the target sample on microarrays. In this way, even a very low-concentrated analyte can be detected within a short amount of time.

After printing capture molecules (MO: morpholinos) on a glass substrate with iTWO, the PDMS concentrator was reversibly placed on top of the substrate. Once a voltage of 50V was applied across the channel, a concentration plug representing DNA was visible in the microchannel (see Figure 1b).

The enhanced DNA-morpholino hybridization can clearly be seen between the concentrated and non-concentrated zone in the microchannel (see Figure 1c). The ease of integration of the concentrator device with standard microarray makes our preconcentration microfluidic chip a promising enhancing tool for microarray-based assays. 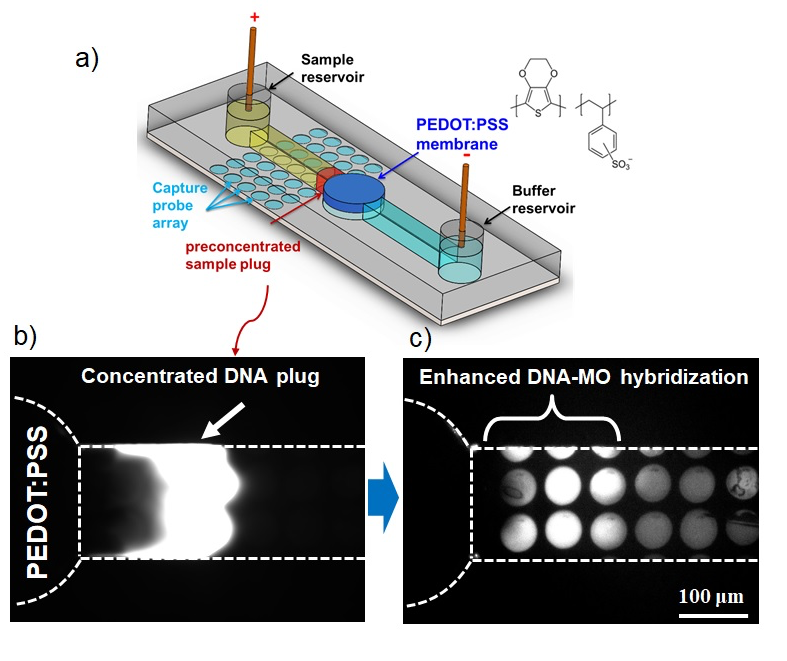